skip to main | skip to sidebar

The photo below shows that someone seems to be testing a variety of different types of wind-power generation equipment--both the traditional western windmill blade style as well as the more modern types of turbine fans. This shot was taken near Deming, New Mexico. 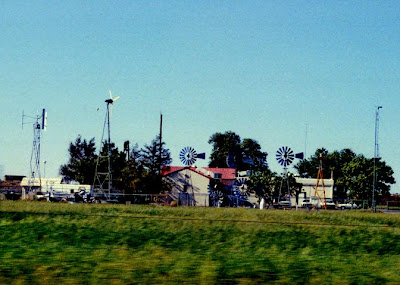 The following two photos show the large photovoltaic array in front of the Denver International Airport. It's an impressive sight for arriving and departing travelers to see--a reminder about how available and accessible solar power really is! 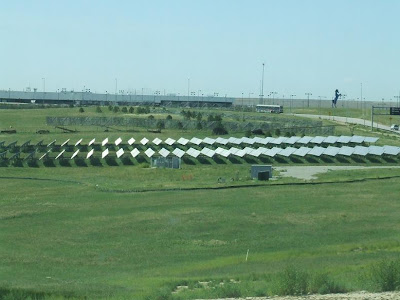 The following two photos are from a housing area near Longmont, Colorado. Not sure whether the panel installation is for the neighborhood or for just one of the individual houses. Interesting to see, however. 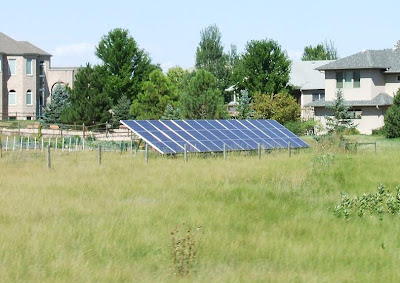 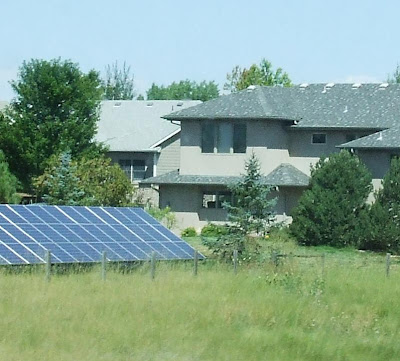 The following two photos are of a solar photovoltaic installation for a water treatment facility near Longmont, Colorado (north of Denver). 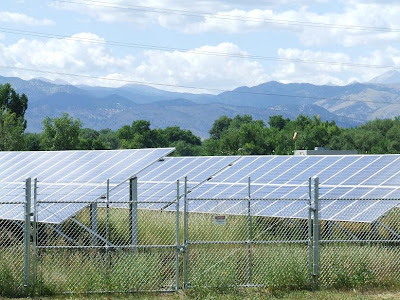 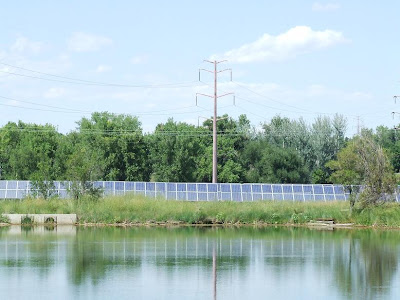 Windmills on the Tehachapi Pass, California

After enjoying a weekend in Las Vegas, Nevada (a place that should be the home to SOLAR POWER!), we drove back to our Northern California home through the Tehachapi Pass Windmill farm -- and I had to stop and get a picture of some of the large wind turbines perched on the ridge of one of the hills by the road. We got there late, so I didn't have much sunlight to help with getting a picture (but at least it was cooler!). 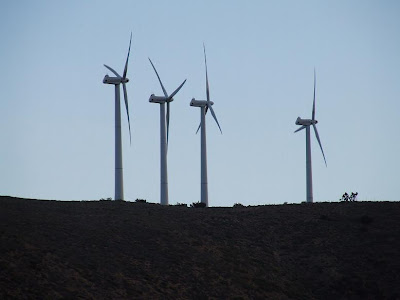 If you are on Facebook, you can follow Tesla Motors and get the latest news from them as it develops. Lately, they've been showing enterprising folks using photovoltaic solar panels to cover the carport in which they park their Tesla roadster. They use the solar panels to recharge their car while it's parked. This is truly a great way to get oil out of the picture. Check out their site on Facebook!
Posted by DaveG at 10:49 PM No comments:

News just came in that the old GM-Toyota NUMMI plant in Fremont, California, will be reopening as a manufacturing plant for Tesla Motors to produce the electric cars. Tesla is inspiring potential buyers around the world with demonstrations of their cars. In more ways than one--this is GREAT news! Not only will these non-oil-burning cars be made in higher numbers and with great efficiency (the factory is already set up to manufacture vehicles--so restructuring it and remachining it to make the electric cars won't be a major overhaul), but this will be a boost for employment in our area as well. When the NUMMI closed a few months ago, thousands of workers were dumped on the streets--not to mention the workers for the supporting industries. But now, those jobs will be filled again--so it will lessen the economic disaster our state has been experiencing.

We recently toured Napa Valley during a relatively sunny weekend. And I was impressed with the amount of alternate energy being used there. One vineyard and winery in particular caught my attention. Their solar array in the back of their winery was impressive (I don't drink -- can't for certain medical reasons. But I do enjoy sightseeing, photography, and investigating alternate energy technologies!) So, while my passengers were enjoying the goodies in the tasting room, I was enjoying getting pictures of the scenery and the solar technology--some of which is pictured here. Enjoy! 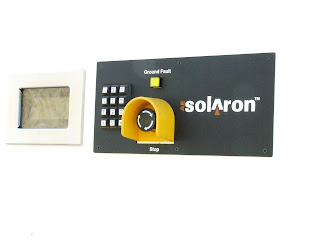 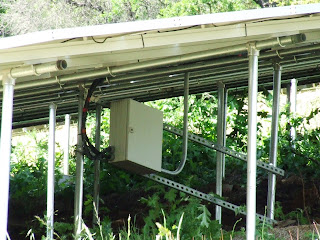 I did wonder, however, why the winery chose to place their solar panel array on the ground (which could have been used for growing grapes or olive trees or just providing green-space), rather than using it to provide a covered parking lot or placing it on the rooftops of their buildings. I would think that having the arrays used as the covering for a parking lot or on the rooftop would make panel maintenance a lot easier. Also, you wouldn't be risking damage from animals or falling trees and branches during storms. But then, I don't know their reasoning--but I liked what I saw anyway. 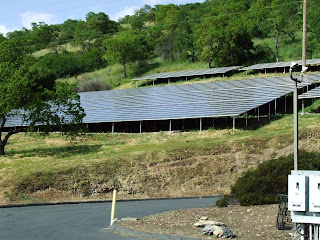 Retrofitting Factories, Retraining Workers - Why Not? Saves the Economy and Many Other Things!

The Toyota Motor Company has decided to close its New United Motor Manufacturing Inc. (NUMMI) Factory in Fremont, California, next year in March. This will put 4700 workers at the NUMMI plant on the streets without a job and the ripples from this will also zap 1000+ other companies that supply parts for the facility.

California officials had offered all sorts of financial incentives for the plant to remain open, but Toyota determined that it must close.

So now, we'll have a huge (5 million sq ft/300 acres) facility laying idle and we'll also have another devastating hit on the already trashed economy of the state. Because not only do all those 4700 workers spend their money here in local businesses (hair dressers/barber shops, movies, car dealerships, gas stations, clothing stores, restaurants, hardware stores, petshops, veterinarians, medical doctors, grocery stores, and so on), but they also pay taxes. If not making money, these folks don't spend it. Likewise, these cuts in spending after the folks get laid off will result in all the businesses they used to patronize also cutting back... and the ripple continues through to rip another hole in the economy.

Ya want numbers? The East Bay Economic Alliance said that the factory has a direct annual payroll of about $512 million. With an additional indirect payroll of $904 million. Estimates are that up to 50,000 jobs will be clobbered by this closing.

Great. While the iron is hot, let's have a new paradigm jump in here.

The Ford Motor Co. built the 160-acre, $50 million-dollar assembly plant that employed 4,000 in 1955 in Milpitas. The factory closed in 1983 after producing 4.7 million vehicles. But then, in 1994 it was "rehabilitated" and opened as a thriving mall--"The Great Mall"--a huge mall with clothing outlets, restaurants, Light-Rail Station Access, easily accessed from freeways (I-680/I-880) and city streets. These stores and other businesses in the mall provide the City of Milpitas with a tax base and the citizens of Milpitas and the surrounding areas with a convenient shopping area (remember, it's accessible by energy conserving Valley Transit Authority buses and Light Rail!).

But maybe we don't want another huge mall on the I-880 corridor. How about we keep the primary purpose of the facility intact. But why not retool the manufacturing equipment to help Tesla Motors produce their electric car? The NUMMI facility is already geared up to provide chassis, drive-train components, metal-bending/molding, and painting.

If cars and trucks are not that "interesting" or viable as options, the facility can also be adjusted to mass-produce on a huge-scale SOLAR PANELS, SOLAR EQUIPMENT, and so on. It's very close to companies in Silicon Valley who have the expertise in photovoltaics, silicon-chip manufacturing, alternate energy, and so on. So, why not get a consortium of investors and alternate energy moguls to buy into this thing? Perhaps even keeping all the workers there and letting them become co-owners? They can be retrained to use their equipment in a new way. They'd probably prefer that to going on unemployment or scrambling for new jobs elsewhere.

I'm just throwing this idea out there... it seems a shame that this huge facility with such manufacturing potential will be thrown into the trash heap.

Let's get more things pushing on this alternate use for the NUMMI plant!
Posted by DaveG at 4:21 PM No comments: 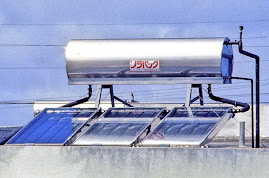 Japanese Solar Water Heater as Installed on Home on Guam

PHEV--Even Better When Plugged Into the Sun!

This is a Plug-In Hybrid-Electric Vehicle (PHEV) modified Toyota Prius. With modifications, it can exceed 100mpg!